Following yesterday’s blog post about the brilliance of OpenCycleMap and the Wikipedia-like service that it’s built on, OpenStreetMap, I’ve been thinking: wouldn’t it be useful to be able to plan a complete bike-friendly journey, complete with turn-by-turn directions and maps?

CycleStreets is not-for-profit cycle journey planner for the United Kingdom. Founded in 2009 as an outgrowth of a Cambridge bike journey planning tool, CycleStreets uses the power of OpenStreetMap and other open data to generate sensible cycling routes from and to virtually any point in the UK.

Even though it’s described as “beta”, I’ve found CycleStreets’ journey planning to be far superior to that provided by Google Maps. Their secret sauce is their mapping engine which properly uses bike routes marked on OpenStreetMap and accounts for factors like slowdowns on  hills, traffic lights and other crossings. 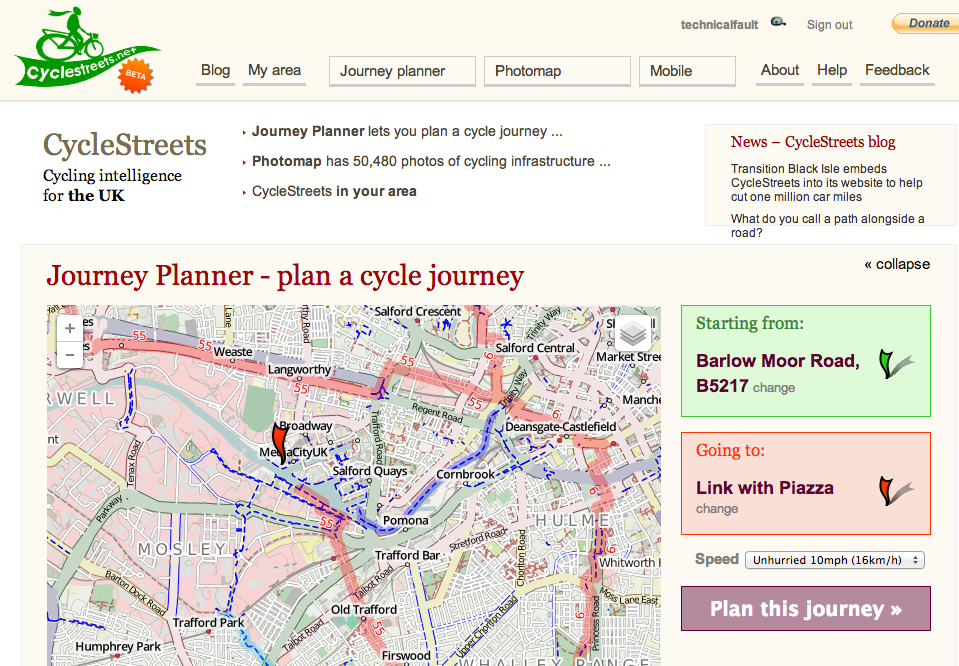 Try this journey from Chorlton to MediaCityUK – perfect for the new BBC commuter. Each route conveniently gets its own URL that can be shared easily and in addition to the map view, there are turn-by-turn directions below.

CycleStreets offers a choice of route suggestions: fastest, balanced and quietest, each catering for a different type of rider, and also offers timings based on your average speed (I choose “Unhurried!”). Usefully, there is a ‘quietness meter’ which gives an indication of how quiet/busy the roads will be, based on their size and also an elevation profile so that you can see at a glance if there are any big hills!

That particular route isn’t the most complicated, as there’s designated bike route for most of the way (NCN 55). The difference between the three options is that the fastest route briefly follows a dual carriageway, then offers a slightly hairy right turn (!). Not for the faint-hearted, but you get my drift.

This exposes one of the major flaws with any automated mapping service – the lack of intelligence, but also giving you what you asked for – the fastest route, as calculated. CycleStreets, though, is designed for cyclists by cyclists so a lot of work has gone into making even the fastest routes reasonably sane so as to offer options to stronger riders. The default mapping style also emphasises the quality of the bike infrastructure installed (if any) so users can make an informed choice about the routes suggested. For more info, you can project the route onto other map layers like Ordnance Survey, Google Maps and its Satellite view.

The turn-by-turn instructions below the route also help inform riders of what they’ll experience along the way, including: surface conditions, whether cycling is legally permitted (as you could be routed over a footpath if that’s the best way) or things to watch out for like bollards and level crossings. All of this is based on data submitted to OpenStreetMap.

Conveniently, there’s a link to Google Streetview at each stage but where possible, there’s also a link to CycleStreets’ user-generated Photomap. This means you can see photos of potential pinch points or areas of concern that are bike-only and where Google’s Streetview cars simply can’t reach.

As an example, I added a photo of the Latchford Locks on the Manchester Ship Canal from last week’s bike ride to Liverpool. The map suggests the locks can be crossed – and they can – but adding a photo and some detail can help riders choose a route that suits them. I, for one, would not cross those giant locks at night!

For such a young organisation, it’s a shame that Google stole a bit of their mojo by adding cycle maps in 2012. Still, CycleStreets happily acknowledge that putting cycle route planning into Google is likely to help more people get on their bikes for short journeys. This is a good thing for making cycling sexy… or at least, normal.

Unlike Google though, CycleStreets is free and does not show advertising. However, they’d love a donation, or maybe you know a local authority or organisation that wants to promote alternative travel options? CycleStreets will also happily build a custom mapper or perform a site integration for a sensible fee. Developers are also welcome – check their API and code on GitHub.

CycleStreets is an invaluable, free resource that harnesses the data freely available and volunteered by the public, as well as open data sources, to suggest reasonably sensible bike routes.