12 January 2010 – A double-decker bus, carrying commuters from the centre of Manchester, was the subject of a possible arson attack during this evening’s rush hour. 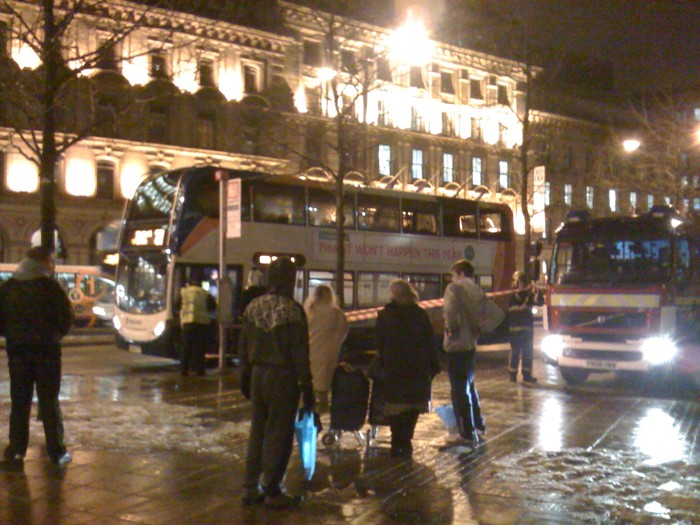 The bus, a Stagecoach route 203 was departing Piccadilly Gardens bus station for Stockport. According to a passenger on the bus, two young men had boarded the vehicle at the bus station. Aaron Braithwaite, who was on the bus at the time, reported that driver insisted they got off the bus because of disruptive behaviour. Following the disagreement, they used petrol to set the bus alight at the rear of the top floor. Other eye-witnesses at the scene of the incident also reported a strong odour of petrol.

At least two fire engines were dispatched to put out the fire. A picture of the bus shows a large burn mark towards the rear of the top deck, just metres from the engine located at the back of the vehicle.
Incredibly, no-one was hurt, though passers-by and passengers were visibly shaken. It is unclear exactly how many other people were on the bus at the time, though Aaron said as few as two other passengers, which may have averted a much worse incident.
Reports on Twitter started coming in at around 5.30 pm (@siibo, @lucyyy318, @piccadillyMCR). Within half an hour, the first picture of the bus, an Alexander Dennis Enviro 400 model from 2008, showed some of the damage (@technicalfault) though the fire service had quelled the flames and the bus was able to be removed under its own power.
As yet there is no report or comment from Greater Manchester Police or GMPTE about the two young men who allegedly set light to the bus. Greater Manchester Police can be contacted via twitter at @gmpolice.
Thanks to the North West Buses site for helping identify the bus. An Apple iPhone, AudioBoo, Tweetie 2, Twitter, yFrog and Posterous were used in this report.