[vodpod id=Groupvideo.4152696&w=425&h=350&fv=autoplay%3Dfalse]
After almost a year of waiting, the online broadcasting network Ustream.tv has released a native iPhone app that lets your broadcast live over 3G.

For many, the ability to record video was one of the key elements missing from the iPhone 3G when it launched in July 2008 and something that Apple only rectified with the iPhone 3GS. Even though iPhone OS 3.0 supports recording and sharing video, it was a feature only available to iPhone 3G users if they had a jailbroken device. Furthermore, broadcasting iPhone 3GS video live was also impossible without a jailbreak.

This offering from Ustream seems to answer both these concerns.

I took the app for a quick test drive around Manchester’s Exchange Square, using the O2 3G network. After fiddling with setting up a specific channel for mobile live video on Ustream, I squirted out about ten minutes of 320×240, ‘slightly blurry’ video with ‘clear voice‘.

I’d love to share that video with you myself, but in classic iPhone style, the app chose the moment where I wanted to save the video to inform me that it couldn’t save the video and promptly lost the data.

Anyway, I’ve shoved up a short clip of my desk to give you an idea of the kind of quality that the service can pump out over a vanilla iPhone 3G (not 3GS) It’s not great, and might actually be worse on a live broadcast – but it seems acceptable for the moment. 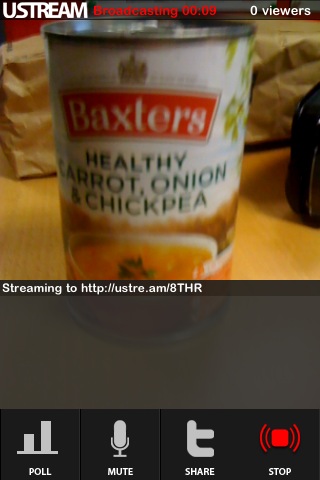 However, you have to ask the question – with O2’s over-stressed data network, will they exert pressure to remove this app, like AT&T have done in the past? Talk of a data ‘crisis’ is now hitting mainstream media, something that intensive users of O2 will have felt for some time.

Still, the iPhone is now available on Orange who boast the widest 3G coverage – and soon on Tesco Mobile (although this is a virtual network running on top of O2). This release of this app does mean that the iPhone can now compete with other video smartphones and provide a degree of live coverage in snap situations where no other technology is to hand.

More details over at TechCrunch.