As I mentioned yesterday, I’m off in London for a couple of days so posting new content and riding is a bit more difficult. Still, I’ll try and do my best. No riding today, but here’s something I wrote earlier as part of a series featuring bike-friendly businesses in Manchester.

Earlier this week, I met a colleague at Takk, one of the (relatively) new cafes on Tariff Street at the edge of the northern quarter.

Takk is an Icelandic themed cafe occupying a space in what I think was formerly a fashion warehouse or outlet. It prides itself on the fantastic selection of coffee on offer, including: espresso-based drinks; good filter coffee and also Aeropress. They also offer cakes, some pastries (which are gone by 10 am) and freshly-made sandwiches at lunchtime, made on bread baked down the road at Barbakan.

I’ve been into Takk a few different times during the day. It’s a great place to grab a cup of coffee and do a bit of work, or just meet people who might be stopping by: think of a common room, particularly for creative and digital types, which explains the number of Mac users. Takk happily caters for them: there’s decent wifi, ample power sockets located around the room and the mix of individual and communal tables is ideal for having some quiet thinking time or getting a group together to flesh out some ideas.

They also do a stunning Brie, apple and jelly sandwich.

Takk is notably bike-friendly: whenever I’ve been in, there have been a few bikes stacked up nearly beside the coffee counter. It’s a warm welcome to riders, if ever there was one. It helps that many of the staff cycle into work too. Unfortunately, there’s no official bike parking outside and a neighbouring local grinch business wasn’t too happy with cyclists locking up against their railings opposite. Takk gracefully responded by inviting anyone who cycled there to bring their bike indoors.

This isn’t a problem unique to Takk: Tariff Street is one of these new bits of Manchester that has yet to benefit from bike parking. Hopefully, we’ll see bike racks appear nearby very soon. It’s something that I raised at the nascent NQ Forum.

I’m looking forward to returning to Takk soon. I still think about that sandwich. But if you can’t be a regular, they do offer roasted coffee ready to take away so you can try and recreate it at home. Just make sure you have an array of Mac laptops to complete the experience.

I had a really positive response to yesterday’s blog post, particularly the link to the London Cyclist blog. Yep, I know I’m in Manchester but many of the learnings collected there can be equally applied wherever you are.

There are, of course, plenty of great bike blogs in Manchester and I hope to bring you highlights from some of those over the coming days. One of my favourites is Manchester Cycle Chic, which shows off cycle style in Manchester. It’s a great way to show that you don’t always need to be kitted out in Lycra or body armour to get around on the bike.

It’s been quite a “bikey” day. I had to edit down this blog post after I published it to give it some focus :)

This afternoon saw a huge celebration as UMBUG (University of Manchester Bike User Group) hit 1,000 members. With almost 40,000 students and 3,900 academics, it’s not surprising that a significant number are bike users and have signed up to the BUG, making it the biggest in the UK.

UMBUG celebrated this milestone with a mass photograph of members and, most excitingly, the debut performance of the Spokes bicycle dance troupe! 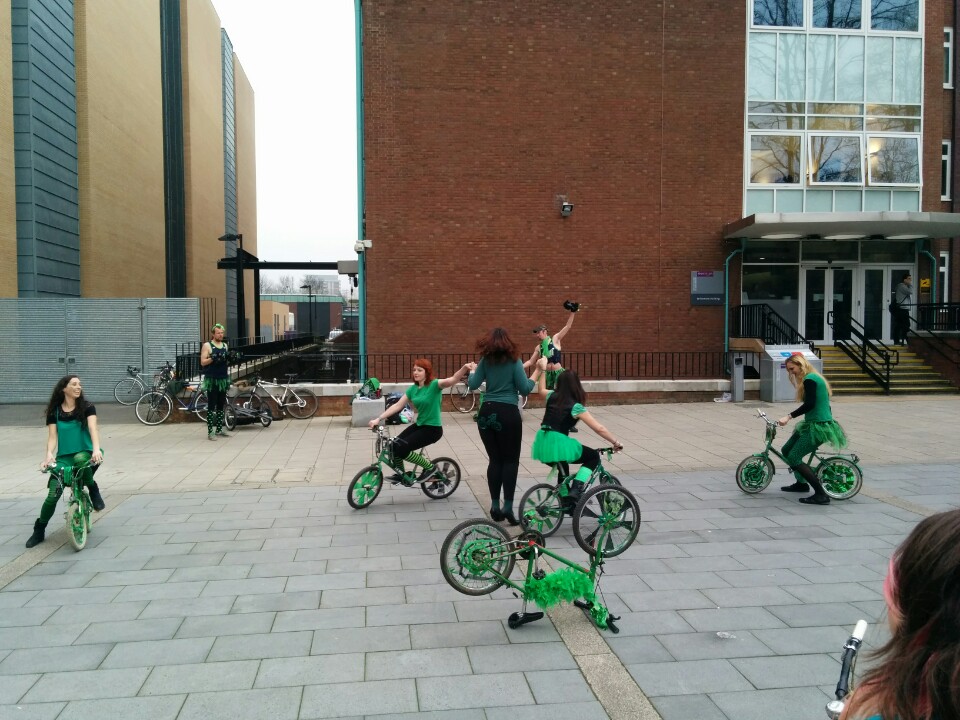 The Spokes are the UK’s first – and only! – bicycle dance troupe, sharing the joy of cycling through the medium of dance. It was described as their debut performance as all the members, except Kat, had joined only a few months ago. Even more amazingly, they’d only started to rehearse eight weeks earlier! So it was a pretty big moment to go out in front of the gathered UMBUG crowd.

Thanks #spokes for a great show at #umbug1000 – you are fab pic.twitter.com/LKasFrCVC7

Sadly the photos do little justice to the energy and enthusiasm put in by the Spokes, even in the face of the sound system not quite working. That didn’t dull the excitement as the crowd joined in by humming – first the Blue Danube waltz by Strauss which then broke into Beyoncé’s Single Ladies. Let’s hope the video goes up soon.

The UMBUG event was pretty good, with TfGM also in attendance freely handing out badges, puncture repair kits and optional hi-vis jackets. Tea and coffee was also available and Dave from mobile bike repair service Revolve MCR was doing on-site maintenance. It was good to see him out despite recent reports of a break in.

The day was rounded off with a quiet drink and catch-up with my former colleague and bike buddy Gabrielle. We reflected on the sad news this morning that a fellow rider lost their life in London. Something I don’t really want to dwell on, but the truth is, cycling and heavy goods vehicles really don’t mix. If you want something more in-depth about cycling and relatively safety, this is a good blog post about how it compares.

Finally, over the next few days, I’ll be on holiday in London so it’s unlikely I’ll be able to post much. Nonetheless, I’ll try and keep up the tweeting and, at least, use those to form the basis of some new content. I’m also really interested to hear what you think I should write about. Feel free to drop me a comment below.