I’m feeling increasingly a fraud as I’ve not cycled for three days straight now. Sadly there was no opportunity in London to hop on a bike, but I continue to be impressed by how many Londoners now take cycling for granted as a completely normal mode of transport.

I was even more surprised to see vans, HGVs and buses regularly obey the (admittedly limited) bike infrastructure such as bike lanes and advanced stop lines (ASLs). London still needs better infrastructure and separation is in many ways an ideal, in my opinion, but it was refreshing to see compared with what I’ve experienced in central Manchester.

Talking of infrastructure, I took the Docklands Light Railway (DLR) for the first time in many years this afternoon. The DLR is a light railway that connects much of London’s regenerated east and docklands. Uniquely, it’s computer controlled and the member of staff on board is usually only responsible for passenger safety and operating the doors .

Apart from the sheer excitement of sitting at the front and watching the train drive itself, I was pleased to see that the DLR now allows full-size bikes aboard during off-peak hours. This instantly increases the choice for customers who may wish to take a “multimodal” journey, particularly leisure travellers and helps provide another way for bikes to cross the river. It’s interesting as an example for Manchester too, as the Metrolink tram system does not allow full-size bikes at any time, despite the similarities: both the DLR rolling stock and Metrolink trams are built by Bombardier and derived from a German design for light rail vehicles with on-street running. 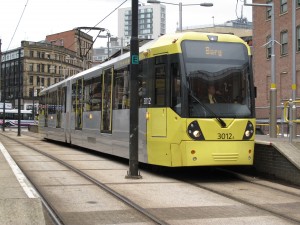 I can understand a ban at peak times, as the crowding is pretty extreme. But during off-peak hours, Manchester’s trams often have a reasonable amount of space. This should get better as double-trams are introduced across all parts of the network at all times: some lines only operate singles.

I hope the lessons of the DLR trial, which resulted in the positive change in policy, are studied closely by TfGM and I know that GMCC have an active campaign. Incidentally, the Tube has allowed bikes  on most sub-surface lines for years during off-peak so I don’t buy the ‘safety’ argument. The DLR scheme does ask cyclists to apply some common-sense rules and in my opinion, that’s all that’s really needed.

And finally, one of the reasons I was in London this weekend was to attend an Angela Lansbury film festival in Poplar, where she has strong family connections. “D’m-angela”, as I’ve taken to calling her, is best known to many as Jessica Fletcher in the popular TV mystery show ‘Murder, She Wrote’ where she famously rides a bike in the opening credits:

Angela Lansbury and her famous bike from Murder, She Wrote. pic.twitter.com/tXd5Ftd3xs

…and for an 88-year-old, she’s looking and moving pretty great. I hope that inspires more older people to get out and ride too!