If you’d just like to donate, sponsor me here — but if you’d like to find out why, read on…

A couple of weeks ago, rainbow flags enveloped social media.

It was a reminder of how much attitudes towards equality have changed in a dramatically short period of time. Legal equality is now a lot closer than it was as little as ten years ago.

Social equality is another thing.

Laws can be passed. Role models can get paraded in glossy magazines. We can start talking about celebrations, not protest marches.

Attitudes can still be ugly.

And young people can still feel alone, can still be living terrified in hostile conditions, just for being who they are.

When they feel that way, the choices can often seem bleak. Sometimes, they might feel they don’t have a choice and they can’t just… keep going.

No-one should feel that way.

We’re hitting the season of summer celebrations across the country and the world. It’s going to be a big one, given the news from the US.

But I’m not quite in the spirit of things yet.

A couple of months ago, I declared myself “in training” for what will be my biggest cycling challenge to date.

On 2 August, I’m joining 20,000 other riders to cycle 100 miles between London and Surrey in the RideLondon 100 event. The annual closed road ride follows a similar route to the London 2012 Olympic Cycling road race, including the infamous Box Hill in Surrey. 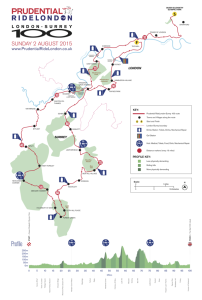 Setting off from the Olympic Park in Stratford, through central London to Hampton Court and out to Surrey for the most gruelling part of the ride. I’m hoping that the thought of a triumphant return and sprint finish down the Mall will keep me spinning slowly up the hills.

Given my generally poor fitness levels, I expect it to be struggle. Just to complete the full ride (and not get shuffled off roads that are about to re-open) I need to maintain a minimum ~13 mph average. For over 8 hours. Think of it like the London Marathon but for cyclists.

It’s now the last few weeks of training before the ride. And the biggest challenge to achieving this is the fight against myself.

For a long time, I didn’t think I was the kind of person who could train for a physical achievement.

Over the last 8 weeks, I’ve slowly begun to change that belief.

I’ve been following a cycle training plan that’s seen make wake up as early as 7am (!) or ride after work to ride 20-30 miles three times a week in whatever weather. At the weekends, I’ve been riding increasingly long single rides in order to build the stamina I’ll need to make it through the full 100 miles in August. Last weekend, I rode my longest ever single ride: 70 miles.

Finally, I believe that I can keep going and do the full 100 mile distance.

Now, I’d love it if you’d help inspire other young people facing much more extreme crises to keep going too, by sponsoring me. I’m supporting the mission of the Albert Kennedy Trust to end LGBT youth homelessness and help other young people believe that they too can keep going, even when they live in hostile environments.

The Albert Kennedy Trust is named for a lad who ran away from a Salford children’s home. In 1989, he fell to his death from at the roof of the Chorlton Street car park.

His death moved Cath Hall, a local foster carer who knew Albert to found the trust in his memory. She was angry about the apparent epidemic of young LGBT people facing difficulty and crisis in foster care, of which Albert was a tragic victim.

Today, the Albert Kennedy Trust (AKT) provides essential support for young LGBT people between 16-25 who are made homeless, or are living in hostile environments. Still operating in Manchester, they’ve expanded to London and Newcastle — providing financial support, legal advice and the new Purple Door project of safe places to stay for homeless young LGBT people.

Even though they now count Ian McKellen and Julie Hesmondhalgh amongst their patrons, they’re not a widely-known charity brand. It’s been awesome to see the positive impact of their work and that’s why I’ve supported them personally for a couple of years now.

But in some ways, the crisis still goes on — perhaps more hidden now and certainly far less mainstream. AKT know that there are always more young people they could help support. More young people who need help to achieve their full potential and just… keep going, even when everything seems against them.

That’s why I’d love it if you’d consider supporting AKT’s mission to end LGBT youth homelessness by sponsoring me to ride 100 miles this August.

You can sponsor me right now here. It’s quick and simple so do it straight away.

Oh and, if you fancy supporting me on the early August bank holiday weekend, do come down to London. There’s a whole weekend of closed roads and cycling fun. And on the 2nd, you can sit in the pub, watching the TV coverage before lining up my pint after my final sprint^W struggle the down the Mall!

Thanks for reading and thanks for your awesome support to help end LGBT youth homelessness.

Twestival is back in Manchester, for the fourth time and, Social Media Manchester are looking to make this one bigger and better than ever before.